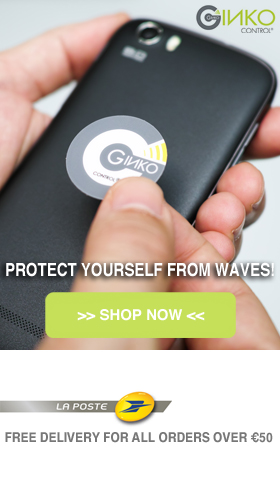 What is the GIИKO-Control patch?

The patch GIИKO-Control of French technology, works according to a physical principle of 180° phase shift.

The whole device works passively by using only the energy of the incident wave, emitted by the mobile phone for example. The wave aspect of the wave out of phase at 180° is automatically "subtracted" from that of the non-phased wave, but without subtracting the captured energies, otherwise nothing would work

The Ginko Control patch does not consume any additional energy at the expense of the battery.

GIИKO-Control Phone is a patch with a diameter of 29 mm. It contains a flexible printed circuit board composed of two identical antennas separated by an insulating dielectric zone and is based on a 180° phase shift device..

The GIИKO-Control patch is carefully manufactured in a specialized factory in order to produce a printed circuit board of the highest quality, thus guaranteeing the proper functioning of the device and its lifetime.

In its Technology range (Ginko Telephone, Ginko Tablet and Ginko Wifi) it is simply placed behind any device emitting electromagnetic waves.

In its Wellness range (Ginko pendant and Ginko protection) it is simply worn on you.

The patch's operating time is unlimited. Only by removing it from the surface on which it has been applied may damage and eventually reduce the adhesive strength of the moisture-sensitive device.

To learn more about it :
THE PATCH / USAGE / PRINCIPLE & TESTS / FAQ